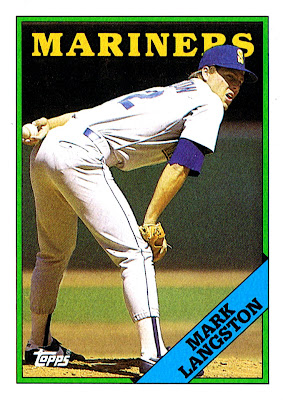 Why this card is awesome: Because it's such a great photo. Like the Clemens photo on card #70, I love that they got Langston's entire body in the shot, but he's also in such an interesting pose. I also like being able to see the warning track and the far wall. To me, this is a classic baseball photo.

Cool stat: Langston had a very nice career, although he's best remembered for two things that weren't his fault: being traded away by the Mariners to acquire a package including Randy Johnson, and for giving up a grand slam to Tino Martinez in the 1998 World Series, one pitch after he struck out Martinez but the umpire missed the call. A little love for Langston: he owned a lot of hitters. Check out the low OPS and crooked strikeout numbers among players with at least 50 career PAs against him. 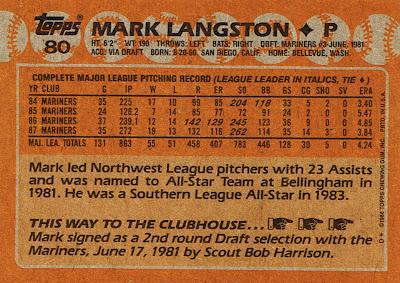