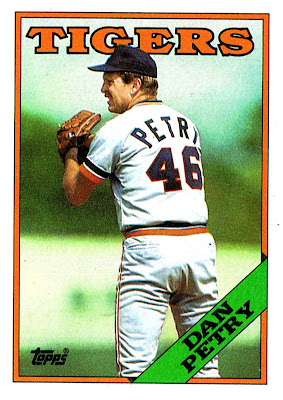 Why this card is awesome: Because is it just me, or does Petry look like a right-handed version of Jim Abbott in that photo? (If any readers don't know Jim Abbott, we'll be coming to him in about another 800 cards, in the traded set. And Petry does in fact have a left hand.)

Cool stat: Petry was an elite pitcher from 1982 to 1985. Over that period, he had the 4th-highest winning percentage among pitchers with at least 800 IP, and he pitched more innings than all three guys ahead of him on the list. Unfortunately, after 1985, he never again approached having a league-average ERA and he was finished in the majors after 1991 at age 32. 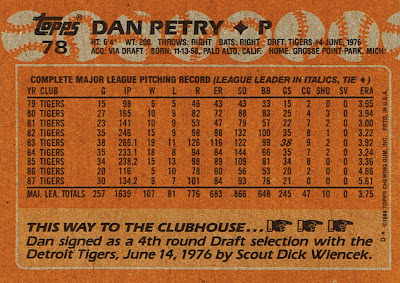 Yeah, he was pretty good for awhile. Jack Morris and Petry were an excellent 1-2 combo at the front of the rotation.

Heres an arcane factoid - his son is a top prospect...for the NHL.