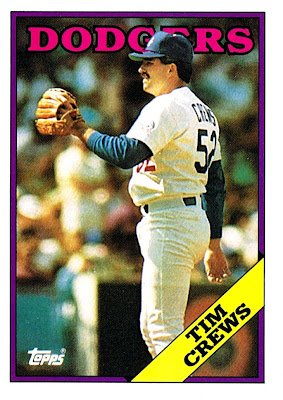 Why this card is awesome: I've got nothing funny to say about the late Tim Crews. His untimely and tragic death is poignant for me because every time I see a replay of Kirk Gibson's homer in Game 1 of the 1988 World Series, I notice Crews celebrating with his teammates around home plate.

Cool stat: Crews was a fine reliever, and makes this list of relievers with at least 400 IP and no more than 40 HR. Of course, a list like that is a bit odd, since a pitcher who so rarely gives up homers would be more likely to have a long career, and eventual give up more than 40 homers (even if at a sparse rate.) 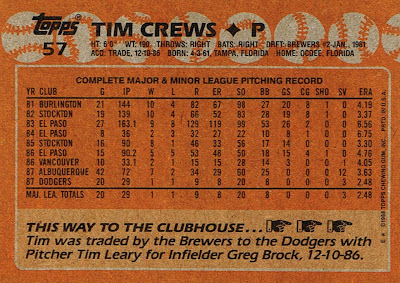 I have a tape of Game 1 of the 1988 Series. I was thinking the same thing the other day when I saw him congratulating Mickey Hatcher in the dugout after a first inning homer.