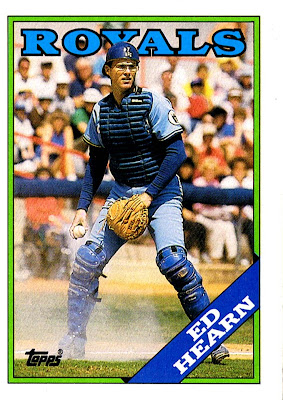 Why this card is awesome: Because of the puff of chalk and dirt, but also because Hearn's wearing glasses. Also, it's nice to see Hearn in his healthier days. He's had some well-documented serious health problems in recent years, and has become a renowned motivational speaker.

Cool stat: Check out Hearn's page at B-R.com and scroll down to transactions. Hearn didn't have a long career and from his playing days, I remember him best as part of a great trade that the Mets made, sending him to K.C. for a little-known young pitcher. Who was that? David Cone. As for the cool stat, Hearn may have the highest ratio of game-ending plate appearances that were victories for his team. He only had 2 game-enders. One out in a loss, and one game-winning single. Fifty percent ain't bad. 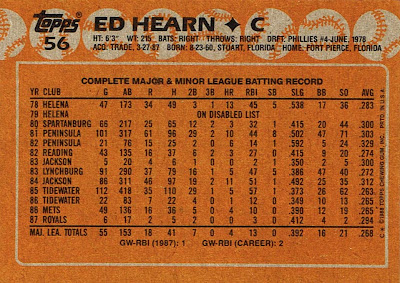 Ed was also a bespectacled catcher, which hasn't happened too often.