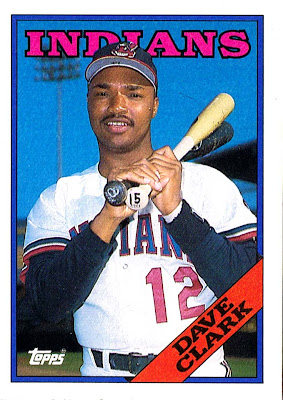 Why this card is awesome: Because Dave Clark is holding two bats. It seems to me that he should have either been holding one bat like a normal ballplayer, or five bats that we could have called the Dave Clark Five.

Cool stat: Clark was selected by the Indians in the first round of the 1983 draft. Now, in any draft, lots of teams make mistakes. It's interesting to see some of the other players taken in the draft after Clark: Roger Clemens (#19 overall to Boston), Dan Plesac (#26 to Milwaukee), Bill Swift (#29 to Minnesota), Chris Sabo (#30 to Cincinnati), Dave Magadan (#32 to New York NL), Rich Amaral (#34 to Chicago NL), Joe Oliver (#41 Cincinnati), #58 Rick Aguilera (#58 to New York NL), Wally Joyner (#67 to Anaheim) and a bunch of other good players in later rounds. 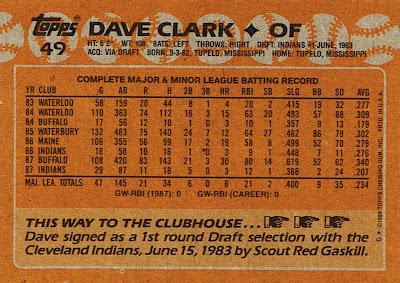 If this picture was taken in 1987, then Clark was holding the bats of teammates Dave Gallagher (#15) and Carmen Castillo (#8 and former Minnesota Twin). Didn't he have a bat of his own? And why not use someone like Andre Thornton, Joe Carter, Corey Snyder or Julio Franco?

That 1983 draft was interesting. Almost everyone in the Top 10 absoutely sucked. Tim Belcher and Kurt Stillwell were far and away the best. Also interesting that 3 of the top 10 played for the Indians in 1987: Clark (86-89); Eddie Williams (86-88) and Darrel Akerfelds (87). None were productive.