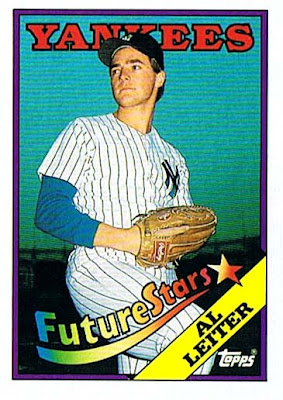 Why this card is awesome: Because it was one of the first big cards to feature the wrong player. Well, the above image is the correct card, with a baby-faced Leiter looking pretty awesome in a photo that was taken either at 5AM or 8PM. The actual error card, which was the only one available for a long time, is below: 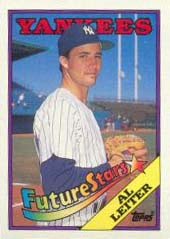 Cool stat: Leiter absolutely owned Andruw Jones, striking Jones out 25 times in 84 at-bats. Jones had just 15 hits, with 5 doubles, no triples, no homers, and 5 RBI. He did manage 10 walks, though.

Another reason why this card is cool is because it says Al's brother Mark pitched in the minors until 1985, implying that he was out of baseball. It's true--he took 4 years off, came back to organized ball in 1989, and pitched in the big leagues from 1990 to 2001. 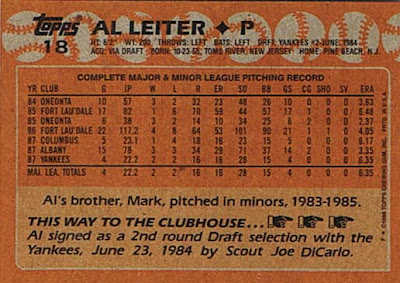 Ahhh, but who is that stranger on the Leiter error card? It's minor leaguer Steve George whp never made it past AAA Columbus.

Also, there were several other notable error cards prior to 1988. The one that comes to mind in the 1985 Topps Gary Pettis. Gary's younger brother somehow made it onto the card.

Yeah, I meant to say that it was one of the first cards with the wrong player TO BE CORRECTED, when they came out with the right version. I collected a ton in 1988 and had lots of the error card, but I don't think I ever saw the corrected one until sometime in 1990.

I happen to have both of the cards in mint condition together what do you think the value might be? Just wondering..thanks for the hemp

Thanks for the hemp? Huh? Oh, you must have meant "help".

I don't know what the book value of these two cards is, but I'm sure the total is less than $2, and in practice I doubt you could get anything at all for these cards. They can be bought on eBay for pennies.

Who's the guy on the error card then?