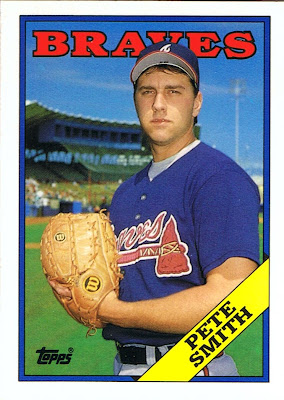 IMPACT FACTOR 4/10: Smith was a part of the bad Braves teams of the late 80s and the good Braves teams of the early 90s. Considering how weak the team was for most of those years, his overall numbers are pretty good. He was great in 1992, going 7-0 with a 180 ERA+ and pitching very well in the post-season. There are two knocks against Smith's value to the Braves: he came to Atlanta in a pretty lopsided trade (see the back of the card below) and he was injured a lot. 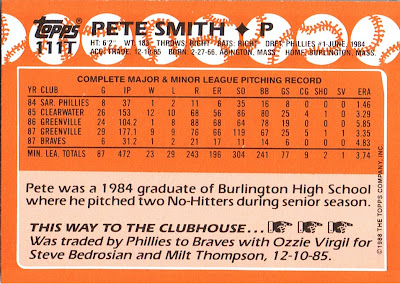 Pete was a member of what the late Skip Caray called "The Young Muchachos." I think this was a little more of Skip's dry, sardonic wit, but the rotation of Glavine, Smoltz, Pete Smith and Steve Avery did have a lot of promise.