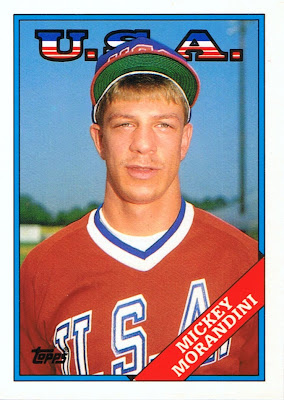 It seems quite fitting to be writing the copy for this card on the morning of the day when the Phillies will play their first NLCS game since 1993 when, you guessed it, Morandini was their starting 2B.

I don't usually comment on the actual physical appearance of players but, man oh man, what an ugly photo! Sort of reminds me of Lenny Dykstra, actually.

IMPACT FACTOR 5/10: Morandini was a pretty good player for the Phillies. He was always good on defense, and by 1994 made himself into an average player on the offensive side of the ball (not bad for a 2B.) Eventually, the Phils traded him away for Doug Glanville, a pretty poor offensive player who was nevertheless good enough to start for the Phillies in CF for several years. Did you know that Glanville's middle name is Metunwa?

Morandini was one of the Phillies' best draft choices in the late 1980s and early 1990s. 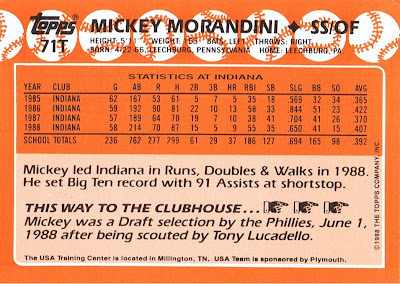 I remember the outcry when the Cubs traded away future superstar Glanville for the Mick. Glanville was okay, but the Cubs always seem to overrate their hot prospects (Gary Scott, Tye Waller, Corey Patterson...).
I liked the Mick here.

The scout that signed Morandini, Tony Lucadello, was an interesting person with an extremely long history with the team.

He was featured both in this book (Prophet of the Sandlots: Journeys with a Major League Scout) and this article at espn.com (http://sports.espn.go.com/espn/eticket/story?page=lucadello).

And, of course, Mickey Morandini's true purpose in life was to play ball so hundreds of fans could imitate announcer Harry Kalas saying "MICK-ey Mor-an-DI-ni"

His impact should be a 9/10 just for all the times Harry Kalas said "MICK-ey Mor-an-DIN-i".

Aw man, Night Owl beat me by 4 minutes. What does it say about me when I sleep in later than Night Owl?

Ever see "Stand By Me?" there's a scene where Gordy is bawling his eyes out. This photo looks like it was taken of Gordy just after that scene...

I never watched a lot of Phillie games but I was watching the day he hadone of these: