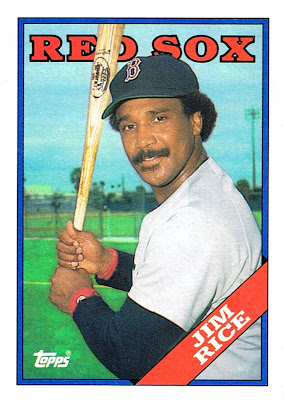 Why this card is awesome: Because in 1988, when I saw this card, I thought Rice looked like a dork. It's not a good photo, bottom line, and Rice deserved better. He goes down with Mike Schmidt as a star player who got robbed in this set.

Cool stat: Jim Rice was excellent, although not as good as Boston-area fans think. In my book, he's just slightly shy of deserving the Hall of Fame, although I think he will be voted in this coming year. His peak from 1977 to 1979 was incredible, though. He was #1 in homers and #1 in RBIs. Among guys who played at least 400 games, he had the 3rd-highest OPS, but he played in 481 games, more than the two guys ahead of him, and 200 PAs more than those guys too. 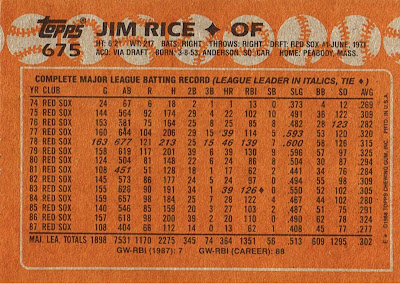