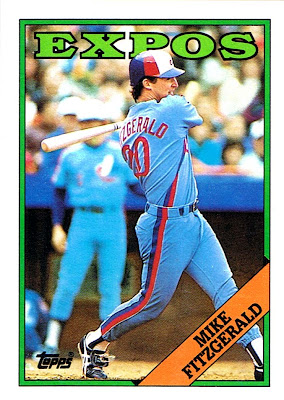 Why this card is awesome: Because I can't figure out which Expo that is in the background. It follows that it's the on-deck hitter, for starters, and it's clearly a white guy or fairly light-skinned Latino player. It looks like he's wearing #1, but the Expos didn't have a guy wearing #1 in 1987 or 1988. So then I looked at the lineups for the 1987 Expos. Interesting that early on, Fitzgerald batted 5th, but he slid later and later during the year until he was stuck in the 8-hole ahead of the pitcher. It's likely that this photo was taken earlier in 1987, though, and that means he batted mainly in front of Vance Law, who wore #2. Seems like that might be Law--there is perhaps a shade of eyeglasses on the guy, and otherwise the color and build is correct. Perhaps it's a pitcher, but those only pitchers with a #1 in their jersey are Floyd Youmans, who that clearly is not, and Randy St. Claire, who had only 6 AB in 1987 (and probably none of them came following Fitzgerald, although that's easy to check.)

Anybody else have any ideas?

This is also the final card in the trade mentioned on the back, having already posted the 4 other guys mentioned.

Cool stat: In 1986, Fitzgerald had one of the top seasons for a backup catcher. For catchers with no more than 250 PAs and an OPS+ over 120, he had one of the highest RBI totals. 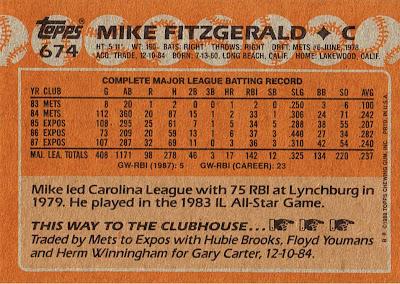 Could it be Reid Nichols (#5)? He only batted after Fitzgerald once in early 1987 (most likely time period because of the long sleeves) but his 1988 Card looks like it was from the same game as Fitzgerald's (you can see what looks to be the same dude in a white hat to the right in both cards)

The jersey number looks like a ruffled 2 to me.

And that looks like Shea Stadium to me (see also: Tim Burke, Casey Candaele, Bob McClure, Tom Foley, Mitch Webster). All of these cards show the Expos with long sleeves at Shea. And splint is right, same white hat fan in the first row on the Nichols card (#748).

My guess is that most, if not all, of these photos were taken during the May 1 - 3 series at Shea. Fitzgerald played in all 3 games, and batted in front of Vance Law in each.

I'm thinking Vance Law as well, especially since Candaele's card definitely shows it was a game against the Mets at Shea and the only other time the Expos went to Shea was in August (no long sleeves then) and late in September and Candaele didn't play in either game in September. Seems like it was definetly that 05/01 - 05/03 series and therefore, Law. Fitzgerald had a homer in that first game, maybe this is the swing?

On second thought, this was the 05/03 game because it's the same game as Reid Nichols and he only played on 05/03 during that series. Fitzgerald struck out twice and went 0-4 in that Sunday game.