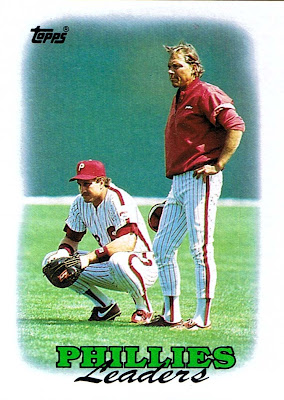 Why this card is awesome: Because the royal screwing of the Phillies continues. Almost all of the individual player cards are bad photos, and now here's one featuring Lance Parrish, who's at least a fairly good player, and somebody else.

Who is that somebody else, you ask? Well it's Mike Ryan, a one-time player for the Phillies who was a coach for them for most of the 1980s. Now don't get me wrong. I'm happy to see players from history on cards. But could they really not find a better photo? One at least where we can actually see these two guys, or maybe one featuring some of the better players on the Phillies team? Like Schmidt, or Juan Samuel, or Von Hayes, or Chris James, or Steve Bedrosian, or Kent Tekulve?

So, by the way, I was wrong when I said that I thought the Brewers Leaders card was the only one in the set to prominently feature a person who wasn't a current manager or player. This one does too.

Cool stat: Still, I'll take this opportunity to comment a bit on Mike Ryan. He finished under .200 for his career, but he hit well off a few HOF pitchers, including Jim Bunning, Juan Marichal, and Tom Seaver. 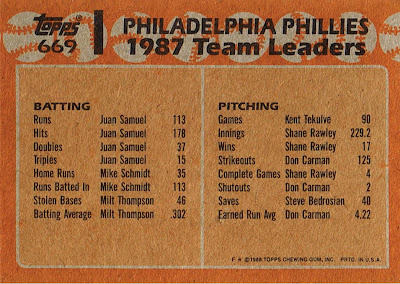 The Cardinals leaders card (#351) features Red Schoendiest. And for some reason, it's not listed when you click on the Cardinals label.

i would've guessed it was the great Buck Showalter

Can we include Lance Parrish among those we suspect are farting on their cards?

Why Lance Parrish though? The only category he led the Phillies in 1987 was most times hitting into a double play. You'd think that at the bare minimum of thought, the default team leaders card would feature the leader for home runs (Schmidt) or wins (Rawley).

david--thanks for the corrections. I added the Cardinals label to the Cardinals leader card, and we have 3 cards with non-player, non-manager personnel.

Parrish was a decent member of the team and good enough to be on a team leaders card, but there were certainly a lot of better choices.

And how true that he looks like he's farting, which is ironic given what I wrote on his own card. See: