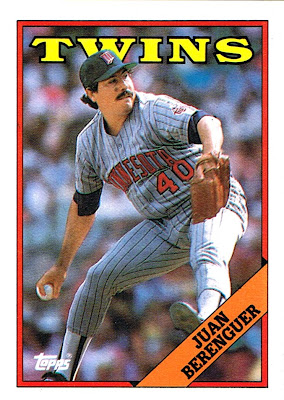 Why this card is awesome: Because, bear with me on this one: for cards where the entire player's body is shown on the card (or nearly entire body, as we're missing bits of both of Berenguer's feet) I think his body occupies a higher percentage of the card area than anybody else. That's not supposed to be a fat joke--I'm referring to how the photo captures him bent over in a pretty compact position, and they crammed that all onto the card.

Cool stat: Since 1983, Berenguer is one of 23 pitchers to have at least 2 career shutouts and 30 career saves. 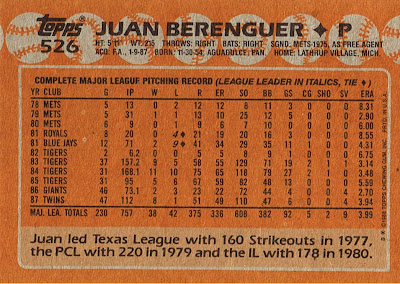 I notice an oddity on the back of the card - Bergenguer tied for the most losses in the AL in 1981 with 13, but since he split time between KC and Toronto, it shows up as leading the league with 4 and 9 losses. Weird.