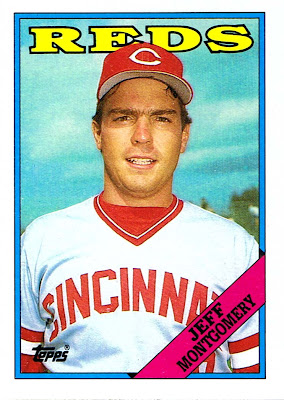 Why this card is awesome: Because it's really damn weird to see Montgomery in a Reds' uniform. What a terrible trade they made for Van Snider.

Cool stat: Montgomery was fourth in saves in the 1990s. And he did that while pitching for a team that was pretty crappy most of those years. Over that same period, he was #1 in games finished, meaning he probably had fewer save chances than a lot of those other guys. 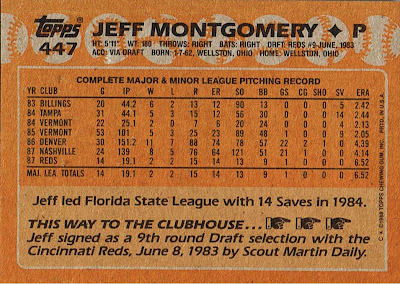 I would've guess it was John Franco #1. I don't think Wetteland would've been in the thought process. Montgomery was always a good closer, but who ever saw him pitch besides those in KC?

KC had a "camp out in the park" night in about 2003. A friend of mine went and was talking to a nice fellow who was there with his grandson. The next morning he heard him talking to his grandson about it being where he played. Jeff Montgomery. Pretty humble guy it seemed to me.

If "no one" except the hicks in Missouri sees you pitch, your career didn't happen.

Huh? Jeff Montgomery was a grandfather at age 39?