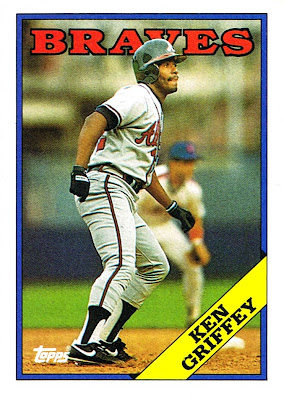 Why this card is awesome: Because we get the nice bonus shot of a Met, I believe 2B Wally Backman.

Griffey is the father of current major-leaguer Ken Griffey Jr. If you needed me to tell you that, you're probably not enough of a baseball fan to be reading this blog.

Cool stat: Griffey was a very solid major leaguer and did a lot of good things in his career. I will always remember him for this game where he homered back-to-back with his own son. It's kind of funny to note that the PI box score tool is a bit messed up there, because it assumes since "K Griffey" appears on consecutive lines that it's a continued at-bat by the same player. 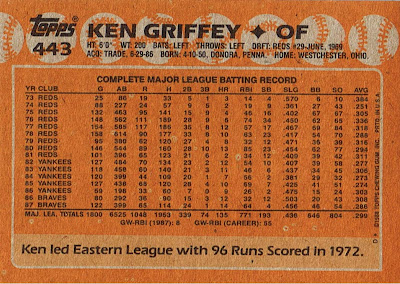 Griffey was a great player, but his son long ago passed him. I'm a fan of both Sr. and Jr. and I'm glad I have the opportunity to see Jr. with the Reds now. I just wish I was old enough during the Big Red Machine heyday to see Sr. in his prime too.

Sr. was a good role player but was never a star player. I always thought of him and Claudell Washington to be somewhat comparable, although Griffey was better than Claudell.

Of all the things Griffey had done in his career, why on earth would Topps chose to highlight that he led the Eastern League in runs scored 16 years prior? That's the kind of thing you see when the player's not done anything, such as "Enzo Hernandez was 2nd in the National League in sacrifice bunts in 1971." Griffey was far superior to Enzo Hernandez.