Readers of this blog know that Matt from The Ugly Baseball Card Blog has made a lot of comments here about Manny Trillo. If you read his blog, you know that he's a very funny guy.

So, I contacted Matt about guest-writing the copy for Trillo's card, which he did (see below.) I asked him how he wanted to be credited on this post, whether as "Matt" or "The Ugly Baseball Card Blog" or something else. He replied:

"It does't really matter, though I suppose 'Matt' wouldn't mean much to anyone besides my mom. (And she's busy making and MTDay cake.) Ugly Baseball Card is fine."

I looked at that for a while before realizing that MTDay meant "Manny Trillo Day," a day Matt's apparently been looking forward to here at 88 Topps Cards for quite a while. :)

Anyway, I really appreciate Matt's contribution, and without further delay, let's get on with it: 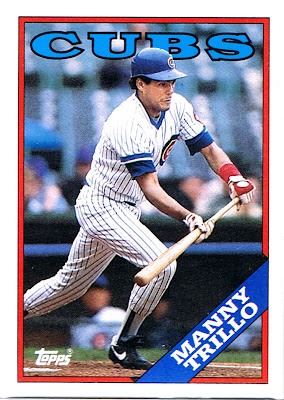 Why this card is awesome: On Dec. 25, 1950, Jesus Manuel Marcano Trillo was born in Venzuela. Was it a coincidence he was born on the other Jesus’s birthday? It seems to be.

Manuel was an average baby: two arms, two legs, one head. And all in the right order.

But soon, Jesus Manuel became a man. And then he became a Manny.

By the time he debuted with the Oakland Athletics on June 28, 1978, he was a legend. He proceeded to take the world of Major League Baseball by storm.

In a May 15, 1977, in the first half of a double header against the Expos, Trillo recorded every out of the game when each Montreal batter lined out to him.

On July 24, 1985, in a game against the St. Louis “Cardinals”, Trillo killed four female fans with his dashing good looks.

Finally, on June 29, 1987, in the game pictured here, Manny Trillo scored an unassisted quadruple play by dropping the called third strike on a ball that he threw, then chasing the batter down and tagging him as he rounded first, before finally doubling up the runners on second and third. (He also pinch-bunted a home run.)

Unfortunately, this card is awesome for none of those reasons. This card is awesome because without a doubt it is the only card in the set that features a cyborg. There’s no way that is Manny Trillo. That has to be a robot taking his place. He doesn’t really look like that - does he?

If that’s really him, I apologize and I may have to adjust some of my earlier comments. Like the one about him carrying a human head in a bowling bag.

Cool stat: Manny Trillo had three index fingers. That’s why he bunted like that - he had plenty to spare. 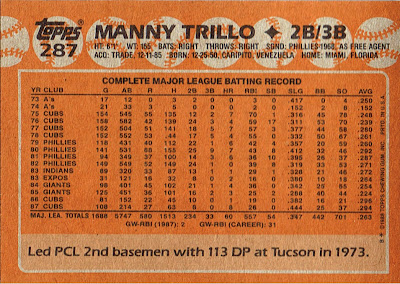 Thanks again to The Ugly Baseball Card Blog!
Posted by Andy at 10:29 AM

I've wondered what this guy's obsession with Manny Trillo is. Man, that has to be one of the worst examples of handling a bat during a bunt.

Happy Manny Trillo Day everyone!
Where I live, all the children are going house to house dressed as Manny Trillo. At each house they receive a different Manny Trillo card. If they collect them all, they recieve a lifesize Manny Trillo cardboard cutout.
I live in a weird neighborhood.

Manny Trillo is one of the leaders for most times missing the cycle by a single. See here: