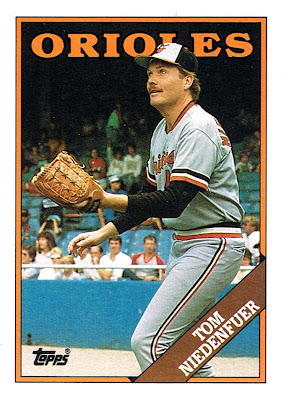 Why this card is awesome: Because aside from the ridiculous pose Niedenfuer (can we call him "Needy" for short?) is in, I again find it amazing how many fans' faces we can make out in the background. I would love to hear from one of those fans who saw themselves on this card.

Side note: That Pedro year in 2000 really sticks out, though. How in the hell did he not win MVP? 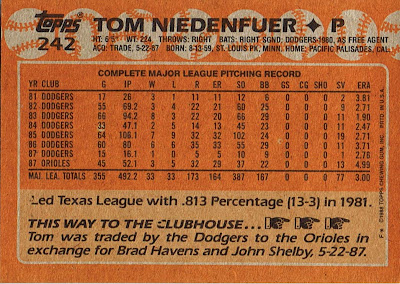 Good point. For once Topps didn't fuzzy out the fans in the stands. I wonder if Topps asked them if it was okay to use their "likeness" before taking the silly pose of Needy.

Needy had an infamous '85 NLCS; losing games 5 and 6 in the 9th inning off of HRs. And Ozzie Smith hit one of them! Oof.

That's the beauty of old Tiger Stadium, the seats were so close to the action you could be sitting there enjoying batting practice and then 8 months loater opening up apck of Topps to find your self in an ugly shirt right therein the background of a card. Go back through your 80's cards and you'd be surprised how often Tiger Stadium's blue seats pop up in the background

The fans in the background are probably dead.