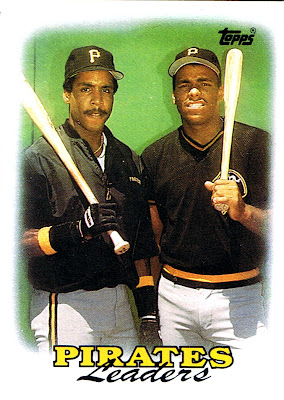 Why this card is awesome: Because although Bonds and Bonilla have both had their share of controversy in their careers, it's hard not to appreciate this card, featuring two very young players who'd eventually become stars. Many of the other Leaders cards in this set feature young players who amounted to very little as MLB players. But not this card.

Cool stat: The 1988 Pirates are one of three teams in history having 2 players with exactly 100 RBIs. Bonilla and Van Slyke did it. Guess how many RBIs Bonds had that year? You'll be surprised.

Someday, Bonds will probably be in the HOF, although it's likely to be a long and difficult road for him. We can't add him to the HOF count here yet, though. 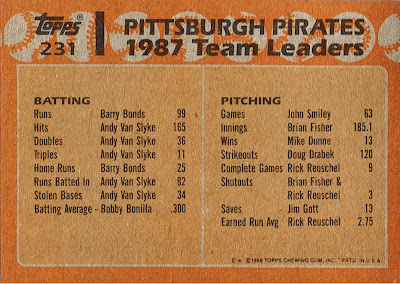 Bonds was still a leadoff hitter back then, that's why his RBI total was low.

Not a bad choice until you see that Jose Lind and his .308 OBP batted second in 142 of Pittsburgh's 150 games that year. Sheesh.

look how small bonds was back then

anyway, 5 years from now, (barring any mlb games by bonds this year)

we'll have:
Biggio
Bonds
and Clemens on the ballot

wonder if we'll have all 3 together