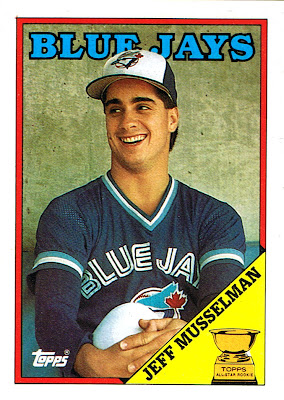 Why this card is awesome: Because there's a speckle on Musselman's face that looks the same as the speckles on the wall behind him. So, did somebody shoot a bunch of spitballs at both Musselman and the wall, or did Topps get some dirt on the film, or does Musselman just have a mole?

This is the second Topps All-Star Rookie in this set so far.

I seem to recall that Jeff Musselman had a fairly serious brain tumor at one point. Does anybody remember? These days he works for Scott Boras.

Cool stat: Musselman allowed a hit per inning for his career, but he walked a lot of guys too. From 1986 to 1990 (his entire career), he cracks the top 25 for highest WHIP among pitchers pitching at least 200 innings over that period. Recent cards Freddie Toliver and Ed Correa make the list too. 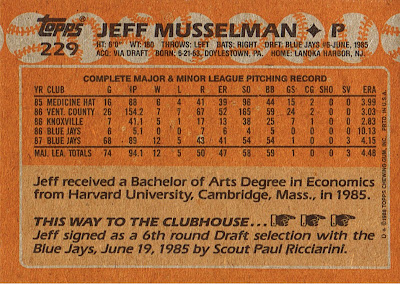 My brother and I, because of the way the photo is cropped, always thout it looked like Jeff was cradling a large egg of some sort in his arms.

I don't remember the tumor, but I do remember that Musselman was an alcoholic.