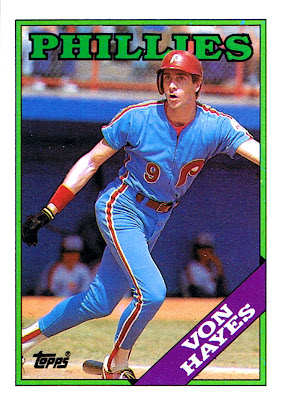 Why this card is awesome: Because although Hayes' facial expression is pretty funny and would normally be enough, this card features an Expos player in the background who is either picking his nose or nodding off. AWESOME!

Cool stat: I think Hayes was a significantly better player than he's remembered as. In 1989, Hayes posted the 5th-lowest RBI total for a player with an OPS+ of 140, 100 walks, and 25 homers. That Phillies team was bad, and that's why nobody was ever on base for Hayes to knock in, and why he got walked so often. With a little more lineup support, he might have had 30 HR and 100 RBIs. 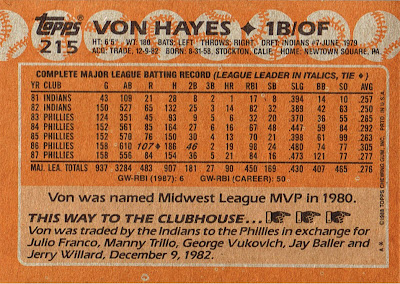 Labels: 1b, of, phillies

The 1987 Topps Von Hayes card also features an Expo in the background picking his nose (or whatever). The photos of Hayes are clearly different but I wonder if the two photos came from the same game (which probably means it was a game in 1986).

Hayes was also on Lance Parrish's card (#95) which is the same photo (but cropped differently) on Parrish's 1087 Topps Traded card.

Those loveable Philly fans never tired of reminding Von of the trade that brought him to Philadelphia by chanting "5 for 1" to him. However, only Julio Franco really did anything for the Indians. Did they really want Jay Baller or Jerry Willard back?

I'm sure the Phils fans were just happy to have Manny Trillo out of town. That guy was nothing but trouble in the locker room. I heard he wrote poetry in the bathroom stalls. Creeeepy.
Von Hayes - good band name.

yeah it IS a good band name. That's why this band is called ... Von Hayes

Yeah it IS a good band name. That's why this band is called...Von Hayes

They did get Jay Baller back. In 1992, he was the bullpen ace in Scranton and got a mid-season callup.

Hayes is coaching somewhere now. I believe York in the Independent Atlantic League.