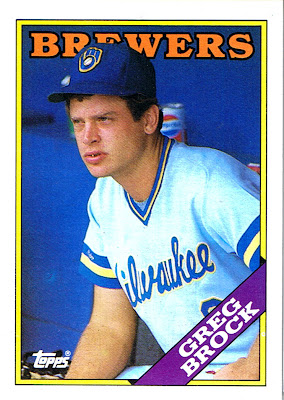 Why this card is awesome: OMG where do I start with this card?!? Firstly, this is card #1 in COLA WARS, with a can of Pepsi being prominently featured in the background. Coming up soon, there's a can of Coke. (Anybody know which card, just curious?) Secondly, and more importantly, it appears that Brock put a little something extra in his Pepsi, as he appears mere milliseconds away from falling into an official drunken stupor. Thirdly, every copy of this card I have ever seen has two strange features: a bit of something shiny in Brock's mouth, like he has a gold tooth (did he?), and the fact that Brock is just a bit out of focus. Somehow, a drunk guy appearing a bit fuzzy seems totally right.

(As an aside, let me be clear that I am joking above and I have no reason to believe that Brock ever consumed alcohol at the stadium.) 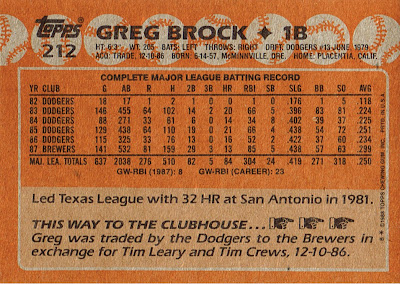 Lot of different stuff going on with that list. You've got leadoff guys who don't have as many RBI opportunities (Bonds, Monday, Henderson, Biggio). You've got some platoon guys who didn't play as much (Cash). Guys who struck out a lot and didn't get RBI's on outs (Deer, Howell, Evans, Durham). Then there were guys like Brock that weren't very good hitters.

Pat Tabler has the Coke.

You're right! Tabler is coming up quite soon.

Holy crap, I'm sorting through my 1988 Topps collection as I move into a new place (1988 Topps was my big wax-pack binge of my collection. I was 7, it really got me started).

I came across Brock because he looks like a guy I work with and came across this blog by searching for an image.