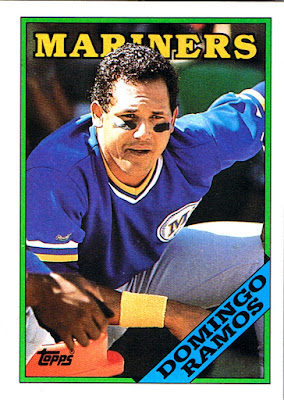 Why this card is awesome: Because I love the fact that they correctly listed his BA and SLG as undefined in 1978 with the Yankees, since he didn't get at-bats. In college, I had a stupid roommate who asked the trivia question "When is the only time a pitcher can throw a no-hitter and the batting averages of the other team don't change?" She stupidly insisted that the answer was opening day, since all batting averages are "zero" to start with, and end at zero after the game. That's not true, of course. I tried to explain to her that the true answer was on the second day of the season, and only if there was also a no-hitter on opening day. Then, the averages really are zero going into the second game. But she was too dumb to get it.

Cool stat: Ramos has one career walk-off plate appearance, coming in this game. 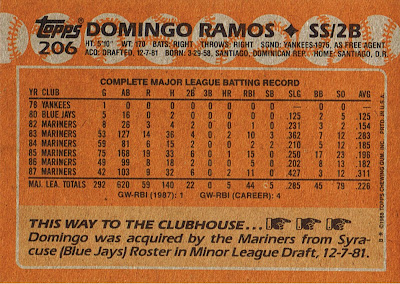 Also, what in the heck is that orange thing on the lower left? Looks perhaps like a pimp hat.

I think he's leaning his elbow on the Gatorade bucket. For a guy that didn't play much, he's sure gone overboard on the eye black.

Also you could have a whole starting 9 of people who don't have a hit yet, doesn't have to be opening day. Could have been 3 hit opening day, all hits coming from one guy, then the next day he's out of the lineup.

That doesn't exactly work, Jim, since the guy replacing the 3-hit guy will have had zero at bats, and an undefined average. But, yes, there are various other intricate ways of making it work.

A few years back, there was heavy speculation that a guy named Domingo Ramos was cast on Survivor, leading some to think (and me to hope) that it was the former MLB'er. However, no Domingo was actually in the cast. A season or two later, they did cast a former pro athlete - ex-QB Gary Hogeboom. He's no Domingo Ramos, though.

Maybe if that horrid show "Pirate Ship" comes back, Domingo could replace Christian Okoye as the token athlete. Or, perhaps, he could be cast on "Dancing With The Stars." Imagine how Len would go off on him wearing that much eye black while doing the Tango.