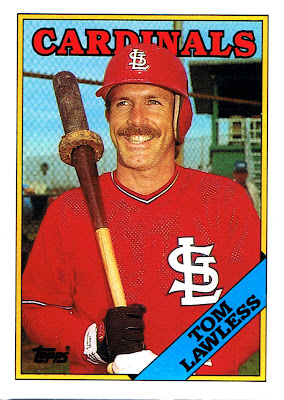 Why this card is awesome: Because of the little floating head on Tom's left shoulder. That's his little angel telling him to smile nicely for the camera. Little devil Tom is standing behind Tom's right shoulder telling him to rip a huge fart right as the camera goes off.

Cool stat: Jayson Stark always used to pick on Lawless as the Last Guy to Get a Hit each season, which I thought was pretty lame. There isn't much else to say about Lawless, though, except that he was a hero to the Reds for being the guy they traded away to bring Pete Rose back. Lawless has his most career PAs off Carlton and he hit him well. 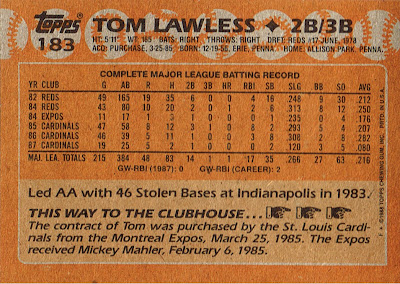 In 1987 the Lawman was the last player on a 25 man opening day roster to get a hit. Typically, Lucy Lawless hit better than him. But for an .080 hitter, he had a stolen base and scored the winning run in the second game of a double header against the Dodgers that Whitey talked about as a turning point in the season. He also had that inexplicable home run off Frank Viola in the Series. A good debate would be whether The Lawman's .080 season or Ron Karkovice's .071 season was "better."