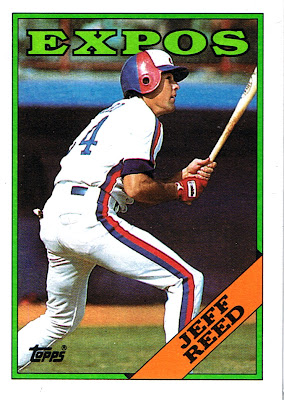 Why this card is awesome: Because of that neat trade Reed was involved in. Reardon is the only player in that trade that had much of a significant career afterwards, with the possible exception of Heaton.

If you recall, Yorkis Perez lost his mother in that plane crash to the Dominican in November 2001.

If I recall, Enrique Wilson of the Yankees was supposed to be on that flight, but he changed it after the Yankees lost the World Series to Arizona. I believe he was going to stay in town for the parade, but when they lost, he ended up taking an earlier flight to the D.R.

And another Expo card shot at West Palm Beach Stadium, It's rare to see an Expo player in his home uniform on a card after they moved into the horrid dome-like stadium. Same for the Mariners and Rays. So if you see an Expo in white, it's gotta be from the spring!

Reed was the catcher for Tom Browning's perfect game in 1988 (with the Reds) because of an injury Bo Diaz sustained earlier in the season. Diaz was Browning's regular backstop.