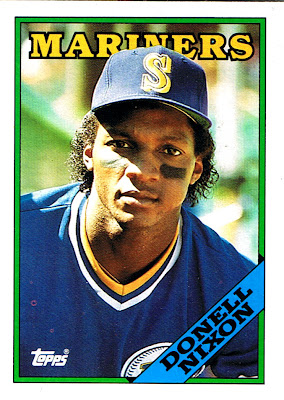 Why this card is awesome: Because of the fact about Otis Nixon on the back. Nixon (Otis, that is) had a terrible 1987, getting into just 19 games in the majors, hitting .059, and appearing to be out of baseball. Who knew then that he would play 12 more seasons in MLB, appearing on two World Series teams?

Cool stat: Nixon (Donell, that is) hit just 4 career homers, and one came off Bruce Hurst, his only hit against him in 10 ABs. Nixon's 3-run job gave the Mariners the lead in this game, before Wade Boggs gave the Red Sox the lead in the 5th and Don Baylor hit the eventual game-winning HR in the 6th. 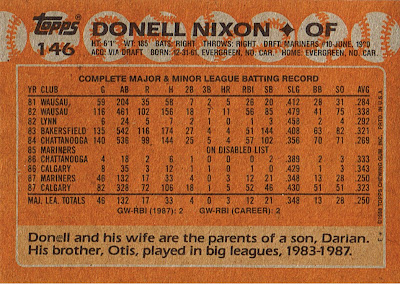 that's the point I was trying to make above, Luke.

He had a compound fracture in his left leg, although I have no idea how it happened.

I remember in law school looking up boxscores with my roommate and having a sarcastic voting for "Nixon of The Day" awards. Donnell didn't win very often.