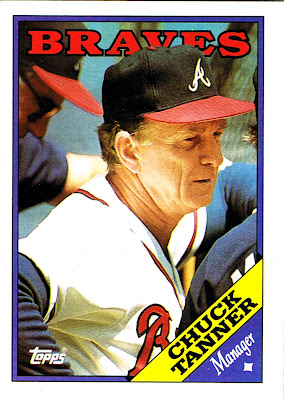 Why this card is awesome: Because I can't figure out who Tanner is talking to. His chatty partner appears to be wearing a blue shirt that doesn't match the Braves uniform being worn by Tanner or the guy behind him. Please don't tell me that Tanner is fraternizing with the opposing team!

Cool stat: The 1988 Braves featured a couple of crappy pitchers who never went anywhere. One was this piece of junk named Tom Glavine, who went 7-17 with a 4.56 ERA. Another one was this lame pickup they got by trading away the awesome Doyle Alexander. His name, not that you'd remember it, was John Smoltz. In 1988 Smoltz went 2-7 with a 5.48 ERA. Neither guy, Glavine nor Smoltz, ever amounted to anything in Major League Baseball. 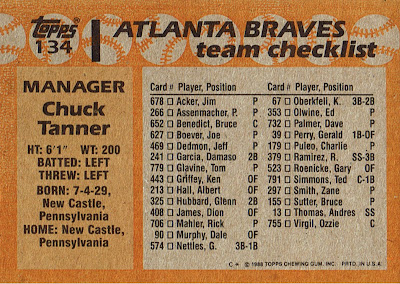 This picture might have been taken during BP. My guess is the guy Tanner is talking to is Rick Mahler. The first letter on his jersey looks like an "M" and he's got some hair sticking out from underneath the cap. Mahler qualified for both.

I also thought that might be Mahler, wearing a slightly different uniform variation with blue on the shoulders. If we could somehow verify it, then our deceased player count would go up, unfortunately.

I remember watching too many Atlanta Braves games in the late 80's and hearing Skippy go on about the "Young Muchachos". You had Glavine, Smoltz, Pete Smith and Zane Smith. I guess that worked out pretty well, although at the time, people simply felt sorry for Chuck Tanner having to manage this lousy team.

with pitchers like those two, it's amazing Tanner's still managing the Braves! Oh, wait... oops.

Ah, that '88 Braves squad was such a wonderfully awful team.