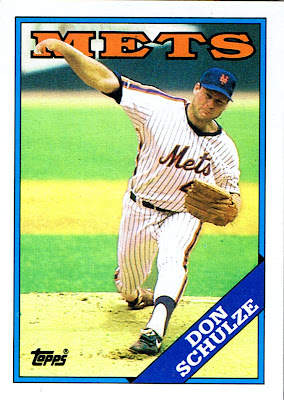 Why this card is awesome: Because OMG WHAT DID TOPPS DO TO POOR DON SCHULZE'S HAND?!?!?!? OK, it's one thing if a pitcher is born with an unusual aspect to his anatomy, such as Antonio Alfonseco's 6-fingeredness or Jim Abbott's lack of a hand on one arm. As far as I know, Schulze's right hand was considered normal, and yet it looks bizarre in this photo. 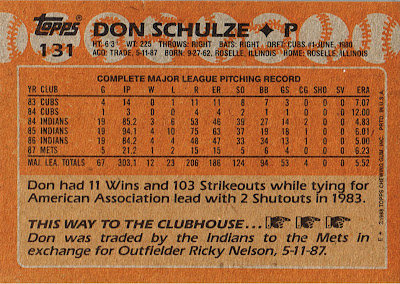 Jimmy, I do believe that pitcher has a hook where his hand ought to be.

The Mets wisely bought high with Schulze - who can resist a pitcher coming off a career-best ERA+ of 83?

It looks like Don is attempting to throw a Valenzuela-esque screwball. It didn't seem to work for him. I was looking elsewhere and found that, while he stunk for the Mets, in '87 he led the IL in winning percentage, going 11-1 for Tidewater. It's a little different pitching for Cleveland than pitching for Tidewater and Buffalo.