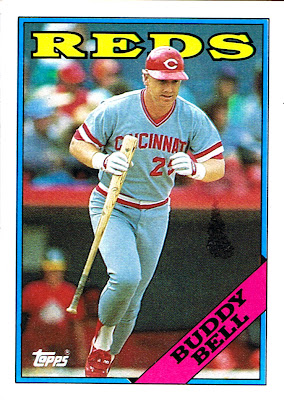 Why this card is awesome: Because Bell's got a hint of a smile as he heads to first on walk. Bell didn't walk a ton in his career, but he struck out even less. Also, what in the heck is that person in the background wearing? He appears to have an Oakland Athletics cap on, but is wearing a strange red shit. Huh? Also, I can't believe they abbreviated Ohio simply as "O" in his home location.

Cool stat: Bell had a great career, but he was not a great base-stealer. For players with no more than 60 SB, he has the second-most caught-stealings of all time. 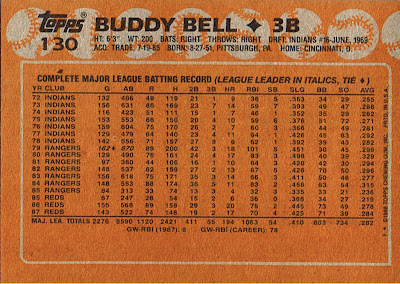 That guy in the background? None other than Manny Trillo, wearing a Reds/A's combo uni. A classic disguise.
Buddy Bell is smiling because he just figured out that's really Trillo and Bell is already dreaming up an elaborate plot to unmask him.