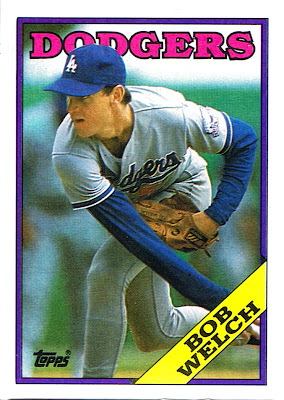 Why this card is awesome: Because I can't believe that Topps decided to write "DODGERS" in magenta. This card shows how terribly it clashes with Dodger blue.

Cool stat: Welch had a really cool career. Between 1978 and 1990, he had a lot of good years. As a rookie, he got rocked by Reggie Jackson in the World Series. He also registered an infinite ERA in the 1981 World Series. He's also got the most recent season with at least 25 wins. 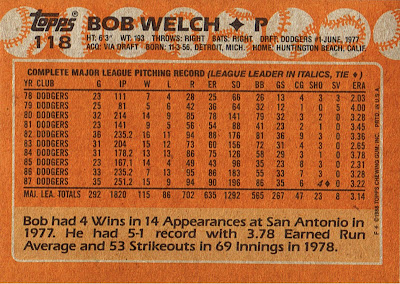 27 wins is very impressive. We may not see that again in a long time.

I can't believe you didn't mention how impossibly long his right arm appears.

Fun Blog about my favorite set ever!!

I didn't notice his arm, but man you are RIGHT!

Clemens could've (should've) won yet another Cy Young in 1990 if the voters didn't go ga-ga over the 27 wins. Welch probably wasn't even the best pitcher on the A's that year, but like Tom Glavine in 1998, wins carried the day. Still had a fine career, though.

Didn't Welch also strike out the great Jax in a series match-up? I seem to remember reading a "mighty Reggie has struck out" write up...