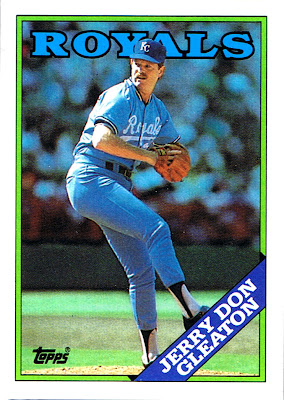 Why this card is awesome: Because of the very odd fact on the back. He signed with the Royals in November, began the season at Omaha, and yet they didn't bother to list his minor-league stats there. Check here to see his minor league stats, including where he was in 1986. The Baseball Cube rocks!

Cool stat: I noticed that Gleaton had an interesting history against Mark McGwire. He struck him out in a blowout. Three years later, he gave up an RBI single to Big Mac. Then, in 1991, he gave up two homers, including a walk-off 3-run job in extra innings. Just two days later, Gleaton got McGwire to fly out to end another game. When he gave up those bombs to McGwire, we all remembered that "Jerry Don Gleaton" = "Adorn Energy Jolt" (that's an anagram, folks.) 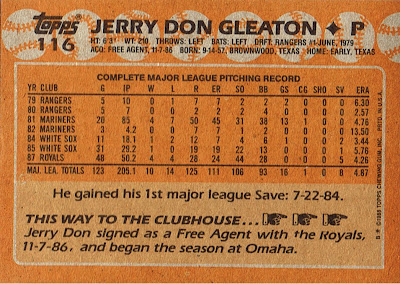 Of course they don't show his minor league stats. As long as the player's been in the majors for 4 seasons, that's all they show.