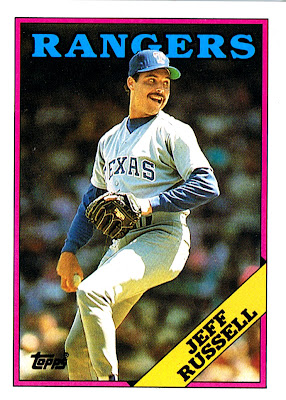 Why this card is awesome: Because of new beginnings. Russell joined the Rangers and put up a horrific statline in 1985 as a starter. The Rangers tried him in relief in 1986 and 1987 and he did pretty well. Then, after another experiment as a starter in 1988, he went on to have a very nice stretch as a closer from 1989 to 1993. 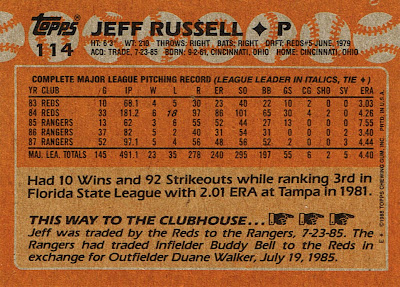 Russell led the league in bizarre facial expressions made while delivering a pitch, as is evidenced on this card. Wouldn't have ordinarily cared about cards of a closer on Texas, but you could usually count on an amusing shot of Russell.

Texas wanted a star reliever from Oakland. They didn't get Eck, so the decided on Jose Canseco

i too was like, 'whats up with the goofy grin' on him