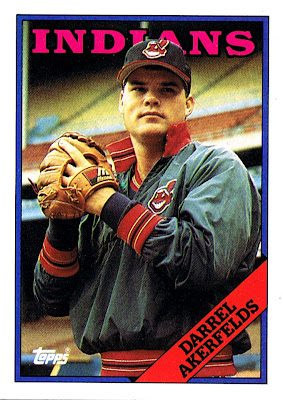 Why this card is awesome: Because nobody told Akerfelds that when you only wear your warmup jacket for running and not for tossing, so everybody realizes that this is a staged shot.

Cool stat: Akerfelds was a hot prospect who didn't pan out, but he did have an amazing year in 1990, pitching 93 innings and allowing only 65 hits. That's a low enough rate to make the top 25 seasons in hits/9 in the last 20 years. Of course, he also walked 54 that year while striking out just 42. OK, so maybe it wasn't quite an "amazing" year. This reminds me of a problem the Phillies are likely to have with J.C. Romero in 2008. In 2007, he allowed just 15 hits in 36.3 innings with the Phillies, helping him to compile a 1.24 ERA. But he'll never be able to maintain that low hit rate, and I bet he gets hit hard this year. Shout out to Tim at MLBtraderumors.com for being the one to make me aware of that. 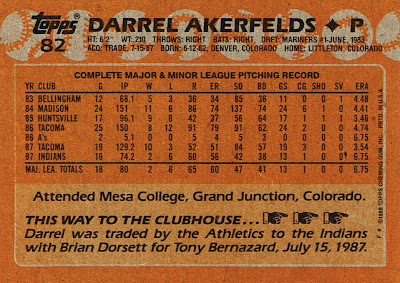 Cool. Akerfelds has been the Padres' bullpen coach for the past several years.