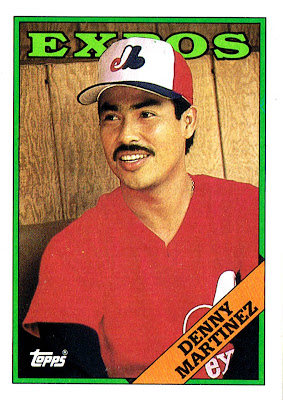 Why this card is awesome: Because this is the only card I can think of that features ACTUAL REAL wood paneling, unlike the 1968 and 1987 sets, which feature fake wood paneling.

Cool stat: Two interesting stats about El Presidente: Firstly, he finished 1 out shy of 4000 IP. Secondly, he went through a really weird period from 1983 to 1986, where he pitched very consistently, but also very poorly. Check it out: 4 straight years with an ERA+ between 72 and 79. Luckily for the Expos, they picked him up at the end of that streak, and he ripped off10 years with an ERA+ over 100 after that (though not all for Montreal.) 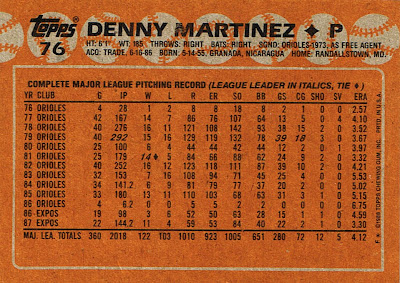 In this case, "really weird period" is also known as "recovery from alcoholism." He sure made a great comeback.

Assuming that alcoholism had something to do with his 1983-1986 period, it's still very strange how consistent he was. (Bad, yes, but still very consistently bad.)

Damn, I HAD forgotten that. here's a list of Puckett's PAs from his last season, indeed ending on a HBP from Martinez.

By his own admission, alcoholism (and recovery) had plenty to do with it. Martinez also had a similar period of eerie consistency from 1978 to 1981, albeit at a higher level.

I think this photo was taken in somebody's rec room, maybe Tim Wallach or Hubie Brooks. Looks as if he's saying "Andres may be a Big Cat, but he's no master at Atari!

That got a chuckle out of me, Luke :)