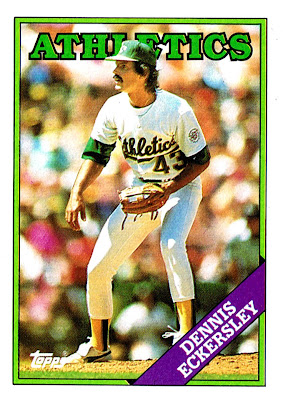 Why this card is awesome: This card might be the most awesome card of the 1980s. Seriously. Here's why: Eckersley had two careers. From 1975 to 1986, he was a starting pitcher, and often a very good one. He won 20 games for the Red Sox in 1978, and that came after he pitched a no-hitter for the Indians in 1977. By the end of 1986, though, he had lost his effectiveness and developed dependence on alcohol. Cast off, he joined Oakland to try to reclaim his career. The above photo was taken in 1987, when Eckersely's career seemed to be teetering on a knife edge and he was struggling with addiction. He looks very tentative in the photo, perhaps an accurate reflection of how he was feeling.

In 1987, Tony LaRussa experimented with Eckersley. He got a couple of game starts in 1987, but also finished 33 games and registered 16 saves. He had a beautiful WHIP of 1.00 and an ERA+ of 137. Encouraged, LaRussa converted Eckersley to a full-time closer in 1988, and all Eckersley did was become the prototype dominant reliever of the current era. By 1989, LaRussa developed the model that all managers use today: the closer is a 9th-inning only guy, except in emergencies where he comes in with 1 or 2 outs left in the 8th. Eckersley excelled in the role, and we all became accustomed to seeing his massive fist-pumps when he closed out big wins for Oakland.

Eckersley gets high marks in my book. He went through a ton of difficulties, worked extremely hard, took responsibility for himself, and achieved great things on the baseball field. To me, this card represents hope and determination, and reminds me that all of our lives hang in the balance of pivotal decisions we make and actions we take.

Cool stat: Check out this list of most career saves for pitchers who also had at least 100 complete games. Guess who's way out in the lead? 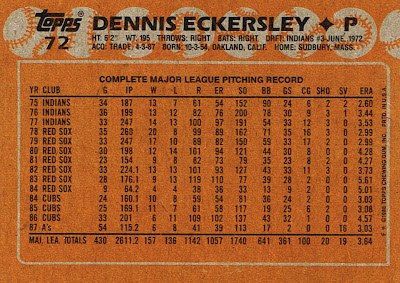 You have to applaud any reliever who gives up a game winning home run to Richard Marx.

Remember when MTV played videos in the 90's?

MTV should have called that "Schlock & Jock Softball."

By the way, I've noticed that two very active commenters here are Luke and Bo. Are you guys the Dukes of Hazzard by any chance? :)

no, but i did stay at a holliday in express last nite!!

but seriously, this is my new favorite web site/blog page. Anything baseball i'll check out