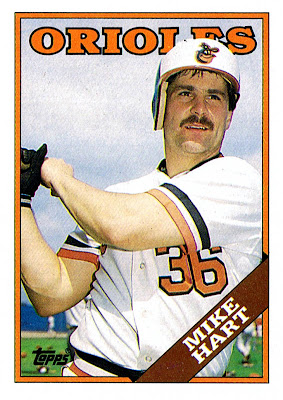 Why this card is awesome: Because of all the time in the minor leagues. Just look at the back of his card! Other than a cup of coffee with the Twins in 1984, he was all over the minor leagues from 1979 to 1987. In the end, what you see below is Hart's complete professional baseball record, as he never played another game (majors or minors) after 1987. His last name should have been spelled "Heart."

Cool stat: Hart hit 4 career homers (in just 105 career at-bats) and three of them were off good pitchers: Jim Clancy, Mike Morgan, and Mike Witt. (The fourth guy, Bill Wilkinson, put up good numbers too but had a very short career. We'll come to him later.) And although Hart's career was short, it wasn't the shortest by a player named Mike Hart. 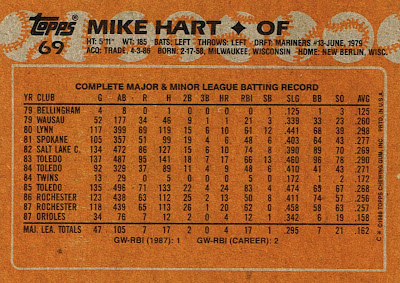 I wonder where he stands on Mel Kiper's Big Board after a solid career at Michigan.

I said I comment on every Twin, so here it is...Mike Hart was not good.