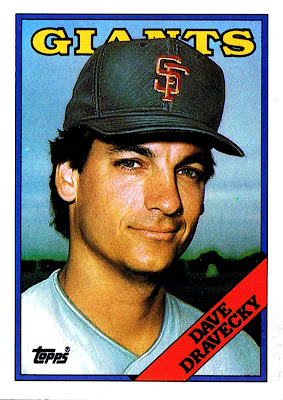 Why this card is awesome: Because this photo of Dravecky looks to me just like actor David Strathairn as White Sox pitcher Eddie Cicotte from the movie Eight Men Out. Except Dravecky looks like he's been in the tanning booth. 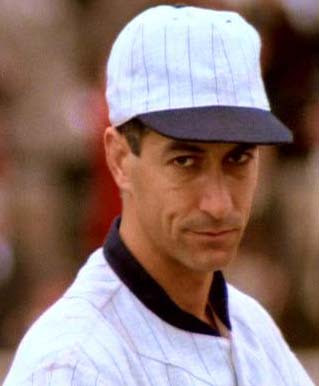 Cool stat: Dravecky pitched very well in the post-season for two teams (the '84 Padres and the '87 Giants) that didn't make it out of the playoffs. Then, in 1989, when the Giants lost the World Series to Oakland (in the year that the Bay-area earthquake interrupted the series), Dravecky wasn't available to pitch in the post-season. He had broken his arm in August of that year, after a long rehab coming back from major arm surgery. As has been well-documented, Dravecky's arm was broken again in September when the Giants won the pennant, and less than two years later, the arm was amputated.

These days, Dravecky is a popular motivational speaker. (He's also very religious, as you'll see from that site. My linking to it is for informational purposes, and I'm not trying to either support or criticize him for that.) 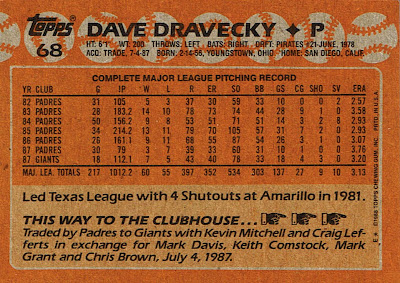 Is his hat airbrushed? The "SF" looks painted on.

It doesn't look airbrushed to me. This seems to be the days before airbrushing for Topps. (Just look at that Jimmy Jones card a few back.)
But who knows.

Hard to tell on the airbrush. The trade was July 4, but I remember these cards being in stores back then by Christmas 1987, so it wasn't that much time to get him in a Giants uni. I think airbrush. Also, look at the uniform top. I think it looks more airbrushed (getting rid of Padre pinstripes) than the hat.

This one almost looks like a chalk drawing or a pianting more than airbrushing.