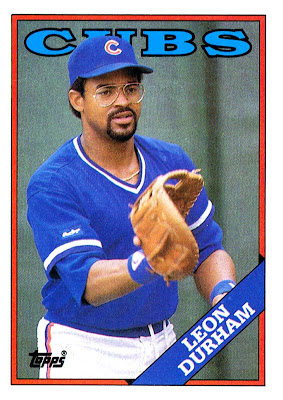 Why this card is awesome: Because of a very thought-provoking trade on the back, essentially Leon Durham for Bruce Sutter. It's an interesting debate as to which team got the better side of the deal. The Cardinals got 4 years of Sutter plus one World Series victory. Then Sutter walked as a free agent. Durham played 7+ years for the Cubs, and made an error that some feel cost them a shot at the World Series in 1984.

Cool stat: People forget that Durham was a pretty good player in the 1980s. In fact, from 1982 to 1987, among players with at least 125 HR, Durham had the 10th highest OPS. He was grouped right around George Bell, Kent Hrbek, Dave Winfield, and Jim Rice, and he was higher than Cal Ripken, Harold Baines, Andre Dawson, Dave Parker, Reggie Jackson, and a bunch of others. 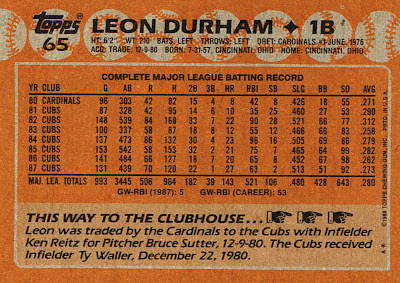