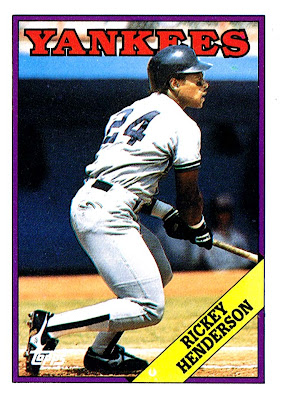 Why this card is awesome: Because of all the italics on the back of the card. They're all over the place! He led the league in stolen bases, walks, and runs scored a bunch of different times, and he held the career record for all three stats (until Barry Bonds took over for both walks and runs scored.) Check out the year-by-year progressive leaders for career walks, scroll down to the bottom, and you can see where Rickey passed Babe Ruth in 2001, before Bonds passed Rickey in 2004.

Cool stat: Henderson was a truly incredible player who had a massive impact on baseball as we know it today. He's a first-ballot Hall of Famer next year. There are many, many cool stats about his career, but I'm going for a totally oddball one here. He's the only guy to be traded for Eric Plunk--TWICE. Check out his page and scroll down to transactions. The Yankees traded Plunk, Jose Rijo, Stan Javier, and others to Oakland to get Henderson in 1984, and then Oakland traded Henderson back to New York in 1989 to get Luis Polonia, Greg Cadaret, and Plunk. (I think Plunk got a bad rep due to name that sounds like 'Kerplunk' or something, but he was actually a damn fine reliever.)

As of now, I can't bump up the HOF count, but a year from now, Rickey will probably be in. 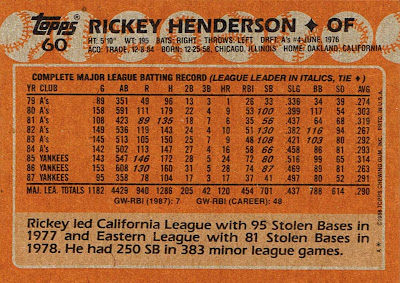