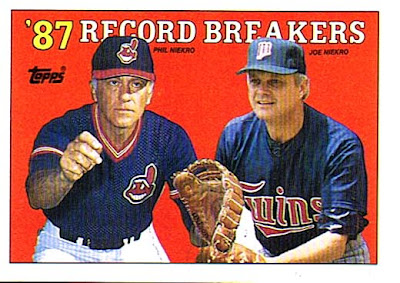 Why this card is awesome: I'm thinking this has to be the card with the highest total age featuring two active players. In the 1987 season, Phil Niekro was 48 and Joe Niekro was 42. That's 90 years total, and I challenge anybody to find a higher total.

Cool stat: Since 1901, a pitcher at least 40 years old has posted 200+ innings in a season just 60 times. The Niekro brothers have 8 out of 60, with Phil leading all pitchers with 7 all by himself.

Joe Niekro is the first card we've come across in the 1988 Topps set featuring a player who is, as of now, deceased. I'm going to keep track of this as we go through the rest of the set, as a point of interest. I would like to stress that I'm not trying to be funny or make light of anybody's death. I just think it's an interesting thing to track. 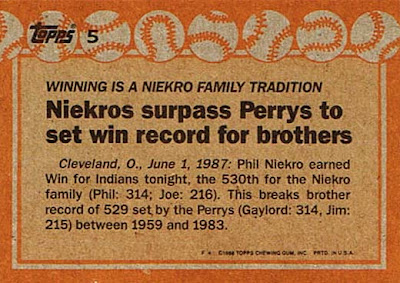 Unfortunately for Joe Niekro he would find himself in search of a team a month into the 1988 season. I myself had the fortune of being at the game in Anaheim when he was caught with the emery board in his back pocket on the mound.

Does Phil have a long sleeve shirt on or are hims arms really that hairy?