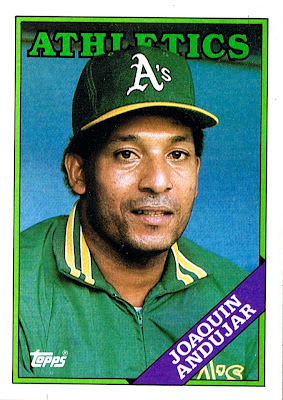 Why this card is awesome: Because of the ridiculous way that San Pedro de Macoris was abbreviated to "S. P. DE M." on the back.

Cool stat: Andujar had two 20-win seasons in his career, but those two seasons are in the bottom 4 for ERA+ in 20-win seasons in the last 30 years. In case you don't know what ERA+ is (you can read about it on the Baseball-Reference.com glossary page) it's basically ERA normalized to league ERA and ballpark. 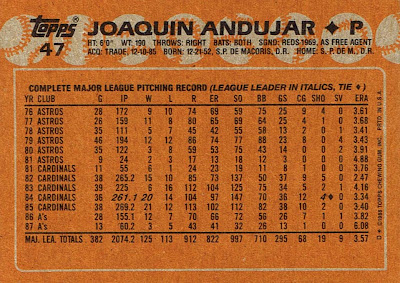 I loved Joaquin Andujar. Facts about him:
1. In 1985 the Cardinals stole a jillion bases. Andujar had the first SB of the year (off Gooden/Carter, no less).

2. In 1988 w/the Astros, he threw at Tony Pena's head. Pena backed away, yet swung at the pitch (as much plate discipline as Andujar had life discipline). Pena then jawed at Andujar about it, Andujar stuck out his arms and I could read his lips on TV "But you swung." Pena then said something else and Joaquin threw his glove down and charged the plate. Jack Andujar is the only pitcher I've ever seen throw at a hitter and then charge him to fight.