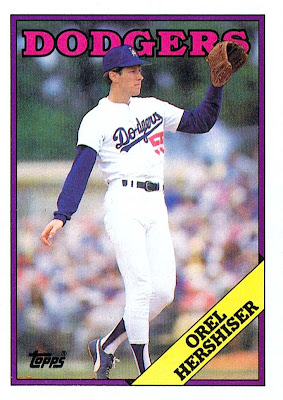 Why this card is awesome: There are a lot of reasons why this card is awesome. For one, Hershiser looks so innocent, not knowing at the time that he was about to have a season for the ages, setting an awesome record, winning the Cy Young award, and carrying his team to a World Series victory. What I like most about this card is that you can see his unusual uniform number-55. It reminds me of the 58-inning scoreless streak he broke with his own 59-inning job. (Why does it remind me, given that 55 does not equal 58 or 59? Not sure, but it does.) 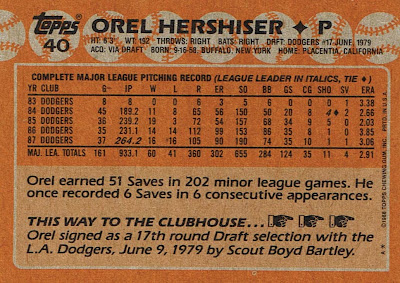 Oh, and 657 cards until Steve Lombardozzi.

one of my favorite pitchers ever!!

Orel had a great year in 85, with a 2.03 era, but doc gooden had a year, definitely a great year for a pitcher

Check out the fact on the back. It looks like Orel was a minor league closer. Probably a good thing for him, because Albuquerque was a launching pad that made guys like Greg Brock, Mike Marshall and Jeff Hamilton look like Hall of Famers.

I never noticed that, but you're right that Hershiser was a closer in his minor-league days. Check out his stats from the minors here: