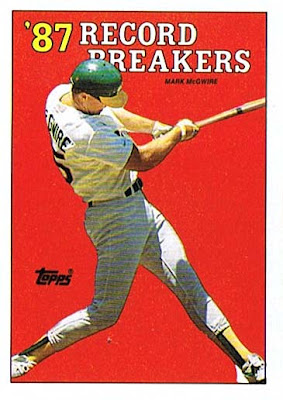 This is the error version of the card, due to that little white triangle near McGwire's left foot. Topps issued a corrected version where this was filled in red.

Why this card is awesome: Because it's one of the few cards from this set where the Topps logo doesn't appear close to one of the corners.

Cool stat: McGwire's 1987 ranks 4th all-time for most homers by a player in his first 3 years. Over on the PI, seasons are not discounted even if the player didn't quality as a rookie. (In other words, it counts 1987 as McGwire's second year even though he had just 53 at-bats in 1986.) 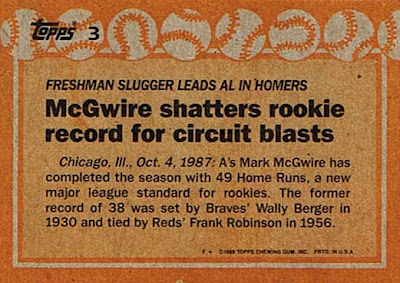 I have this card from when I collected as a youngster. I recently got my baseball cards from my moms house and am going through them...I have several Mark McGwire ones. I just collected because of poses or whatever...not the name....who knew I would have some greats! Oh yeah...is this card worth anything?...with it being an error and all?

I don't know what official price guides say, but I'd be shocked if this card, error or corrected version is worth more than 10 or 15 cents.

I have this card with a very strange error. There was NOTHING printed on the back. The entire back of the card is blank. What could my card possibly be worth?

Very little, unfortunately. In the late 1980s Topps produced many 'error' cards that had blank fronts and blank backs. You can find them all over eBay. Generally they sell for very little.

How much is this card worth