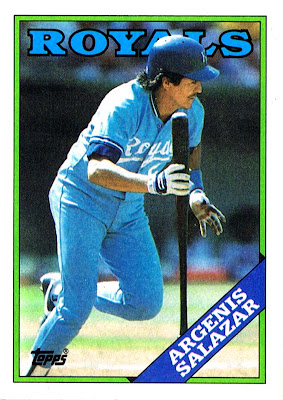 Why this card is awesome: Because Salazar is displaying the proper technique for avoiding the automatic out in Tee-ball. For those of you who played it as a kid, you'll remember that throwing the bat was an automatic out. Holding and then gingerly dropping the bat is the way to go.

Cool stat: Salazar was involved in an unusual game-ending play. He had the final plate appearance in 6 games, but one of them came when his team was already winning, which makes very little sense if you think about it. How can a batter bat, and make the last out of the game, if his team is already winning? If it were the top of the 9th, then it wouldn't count as the last out of the game since the other team would bat in the bottom of the 9th.

Check out the boxscore for the answer. The Royals were ahead in the bottom of the 5th, then Salazar made the last out of that inning. Then, the game ended due to rain. So Salazar ended the game on an out, but his team won. Quite unusual! 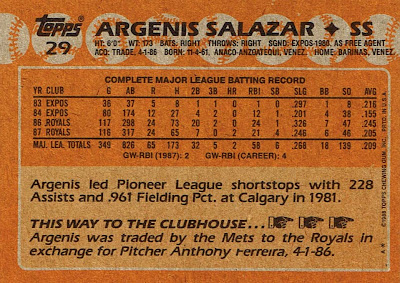 I like the "This Way to the Clubhouse" section. He was traded to the Royals by the Mets, but he never played a major league game for the New Yorkers.

MOST. AWESOME. BLOG. EVER.

Looks like he just bunted. That would explain why his hand is on the barrel of the bat.