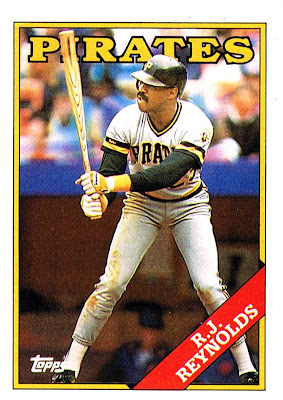 Why this card is awesome: Because it's such an obvious error card--R. J. is missing the cigarette in his mouth. Seriously, does anybody understand why he was named after a famous & wealthy tobacco farmer?

Cool stat: Reynolds had a short but fairly productive career. He is one of just 14 players with at least 100 SB and 250 RBI who appeared in no more than 800 games. And three of the current guys--Coco Crisp, Chone Figgins, and Felipe Lopez--are almost certain to exit that club by eventually passing 800 career games. (In fact, the could all pass 800 games in 2008.) 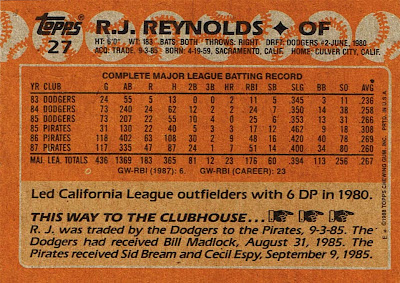 Robert James was one of my favorite buccos of the late 80's. R.J. wasn't the best hitter, but his glove was a great asset for the bucs.

Syd Thrift made some great deals in the mid 80's as the bucs gm of operations. Netting Doug Drabek, Bobby Bonilla were two. If the bucs had a Syd Thrift-like GM/CEO in the past 15 years (unlike Cam Bonifay, McClatchy and Littlefield) the bucs would definitely have some winning seasons....