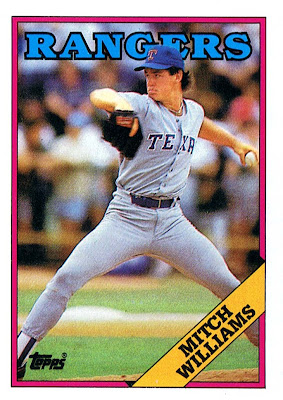 Hey, it's the start of better-quality scans!

Why this card is awesome: Because of the homer he gave up to Joe Carter in the 1993 World Series, we forget that Mitch Williams was a pretty successful closer for several years from 1989 to 1993. What makes this card awesome is Williams' universally terrible stats at every stop in the minors, from Walla Walla, Washington to Tulsa. Just think, he made the Rangers in 1986 after allowing more walks than strikeouts in Tulsa in 1985. Obviously the Rangers knew something, or maybe it was the Cubs who knew something when they got him included in the trade for Rafael Palmeiro.

Cool stat: Williams pitched 262 career game-ending plate appearances. 200 of them came with runners on (perhaps that he put on, or perhaps that he inherited.) In those game-ending PAs, 35 runs scored, and he gave up 20 hits (including 1 double and 6 homers), no walks, 91 strikeouts, 3 sacrifice flies, and 12 double plays. Interestingly, despite his propensity for walking batters, he never lost game by walking in the winning run, which many closers have done. Aside from the post-season, he allowed 6 walk-off homers, including grand slams to George Bell and Kevin Bass. I don't mean to sound like I am picking on Williams. All closers blow saves and give up homers. For example, Trevor Hoffman has given up 9 game-ending bombs, including two to Mike Piazza, and also has walked in the winning run twice. It was his strikeouts the Rangers were interested in. Notice the high strikeout numbers his entire career up to that point.