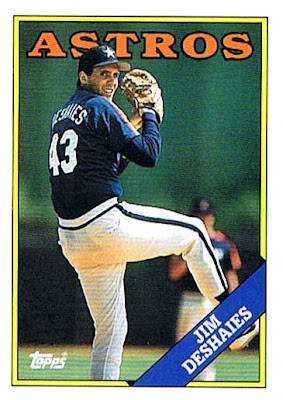 Why this card is awesome: Because I'm absolutely sure that Deshaies' right knee is blocking us from seeing that guy in the background picking his nose. Most likely, that's second baseman Bill Doran.

Cool stat: Deshaies was a decent pitcher, but he was an absolutely awful hitter. In fact, since 1901, guess who has the most career at-bats without an extra base hit? Yup, Jim Deshaies, a career -33 OPS+ hitter. (Yes, that's -33, not even +33.) 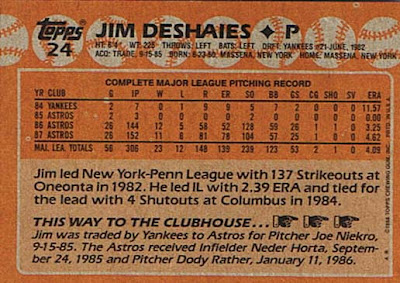 whoops, almost let Jim slip by my Twins radar. Deshaies pitched for the Twins in 92-93 before being traded to the Giants. Jim is the recipient of one of my all-time favorite Chris Berman nicknames, Jim "Two Silhouette On" Deshaies.