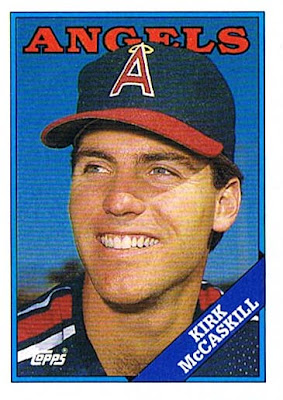 Why this card is awesome: Because the "This Way to the Clubhouse" feature on the back reveals that current Tampa Bay Rays manager, Joe Maddon, was a scout with the Angels way back when. McCaskill's also sporting a nice set of pearly whites.

Cool stat: Fifteen pitchers since 1977 have lost 19 or more games in a season. (It's been done a total of 16 times, since Jose DeLeon did it twice.) McCaskill is one of those 15, but he's got the fourth best ERA+, at 96, and really did not pitch so poorly to deserve 19 losses. 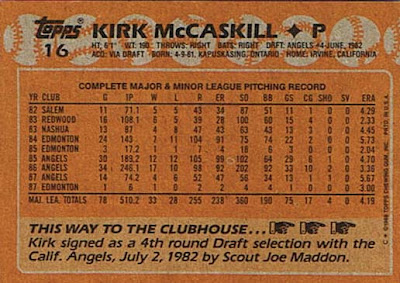 This card is also awesome because it shows that Kirk was born in Kapuskasing! I knew he was Canadian but Kapuskasing?!?

Thanks for this blog, which will provide us with yet another angle from which to peruse Baseball-Reference.com. I mean, I had never analysed the career of Andres Thomas up to a few days ago!

Nice catch, Ali. There are some other interesting birthplaces coming up....keep watching.

As a collector since '88, this is an awesome site/blog! Very creative!

Can't wait for the pirate cards!

If I am not mistaking this is taken when the Angels use to hold spring training in Palm Springs. I knew Kirk was a Canuck and hockey player. I will never forget seeing him play goalie in the CWS locker room with Bo taking shots on net

Signed by scout Joe Maddon - is this the same Joe Maddon that managed the Rays this year (2008)?

Sorry, sorry... I should have read the entire post. My mistake. That said... I'm happy to see I was correct!

Absolutely the same Joe Maddon. He's mentioned on at least one other card in this set.