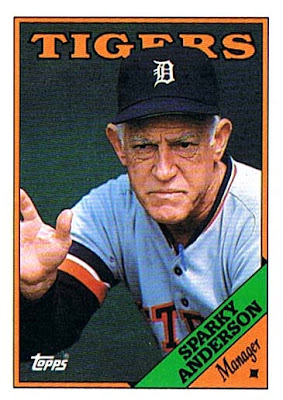 Why this card is awesome: Because Sparky Anderson is showing off a classic managerial pose, and looking crusty while doing it. Do you realize that, born in 1934, Anderson was only 53 when this photo was taken? He looks at least 65 to me.

Cool stat: Did you ever look at Anderson's major league batting record? He played one year with the Phillies in 1959, and didn't hit all that well (not to mention his poor SB%.) He did hit pretty nicely against Sandy Koufax: 2-for-8 with a double and three walks. 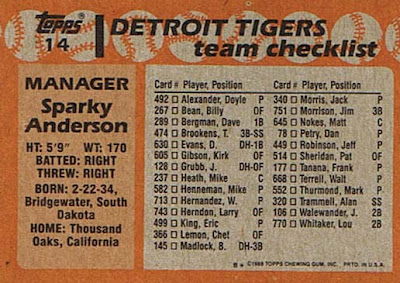 That's what he looked like managing winning teams. Imagine if he had managed losing teams. He had 3 WS winners in his pocket and only 1 season below .500 when this picture was taken. Maybe he knew what laid ahead as 5 of his next 7 seasons would be below .500

It looks like he knows the Jedi Mind Trick, if you ask me.

Indeed. Somewhere, out of frame, Alan Trammell is being thrown against a wall.

There will never be another Sparky, but I sometimes think the Tigers kept him around a little too long.