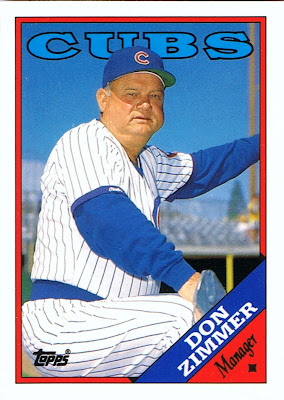 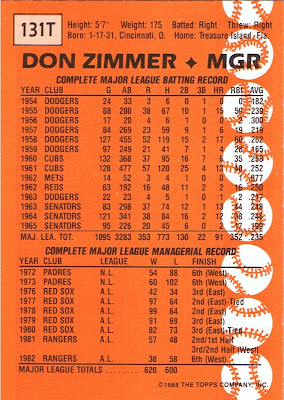 The Cubs didn't make the Series in '84, losing the final three games in Jack Murphy Stadium to San Diego. Ask Cubs fans about Leon Durham in that series. Go ahead. I dare you.

In '89, the Cubs won Game 2 but nothing else. I would've sworn they were swept as well.

The Cubs have not made the World Series since the War-diluted year of 1945, when they lost to the Tigers.

Andy must dabble in that occasional non-reality based world vision that I mentioned in the comments for the final poll for the best of 88 topps. Unfortunately for the Cubs, even in a fantasy world, the best we can conjure up is them making it to the World Series and losing. Woo.

my favorite later zimmer moment was his getting knocked out by a foul ball in the dug out and then showing up the next day with an army helmet on (painted in a yankee logo even).

and of course, the cubs choked away the 84 NLCS, with leon durham playin the bill buckner role.

I don't know what I was smoking when I wrote this entry. I have fixed the mistakes, thanks.

This is the very last card of a player or manager in the set.

is zim the last Senator in baseball? (Even though he's behind the scenes in TB)