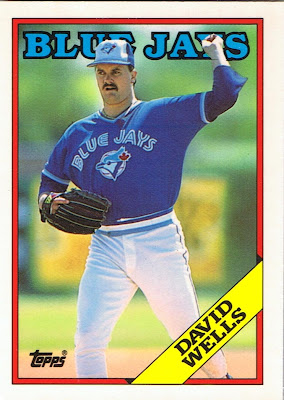 Here's the irony of this card:

This is another fantastic rookie card from the 88 Topps Traded set.

IMPACT FACTOR 4/10: Wells, along with Duane Ward, were the two unheralded members of the Blue Jays bullpen that led them to success in 1992 (and in Ward's case also in 1993.) Wells was a great reliever for the team and pitched wonderfully in the 1992 post-season.

Wells went on to have a very good career, winning more than 60% of his decisions, including a 20-win season in 2000 with Toronto during his second stint with the team. He appeared in a whopping 17 post-season series with the Blue Jays, Reds, Orioles, Yankees, Red Sox, and Padres. Sure, he was in the right place at the right time quite often, but in many cases, it was his own presence that made it the right place.

Wells was a colorful and often obnoxious player, but he was a damn tough competitor and made the most of his talent. 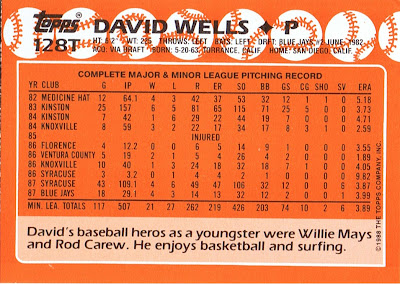 People who are familiar with him will marvel at the fact that not only is he skinny, but he has hair too!

Notice that he is in mid delivery, yet there is no ball in his hand...

His baseball heros are Rod Carew and Willie Mays? When did he become a Babe Ruth-ophile? My favorite memory of him is when he tried to wear an authentic Babe Ruth cap on the mound one day.