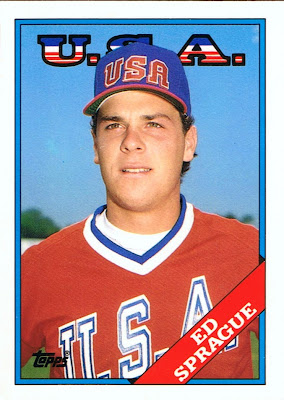 A little while ago, on Doug Robbins' card, we noted that Sprague's dad is mentioned on the back of the card.

IMPACT FACTOR 4/10: Sprague was a decent 3B for the Blue Jays and played on both the 1992 and 1993 championship teams. He hit well in those post-seasons except for the 1993 World Series. 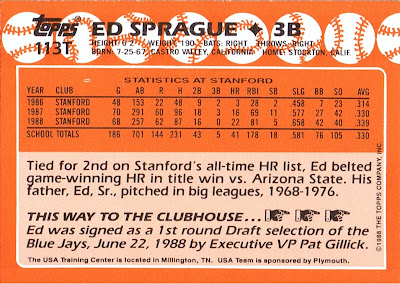 I've never understood why they put the person who signed the player on the card... Is that supposed to be impressive or something? I always read those and go, "Okkaaaayyy..." I dunno, maybe it's just me. Of course, I do own an auto'd card from the guy who signed Thome for the Tribe, so maybe I should just delete this reply.... nah...

Amateur scouts are pretty important, although in the era of the amateur draft, they don't have quite the impact they did in the pre-draft days. I can say it was an honor to be invited into the home where Tom Greenwade signed Mickey Mantle to play for the Yankees.

a bright spot in a dismal year